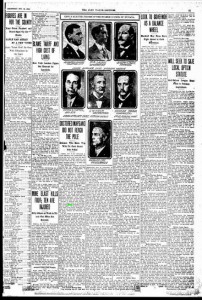 DOCTORED MAPSAND
DID NOT REACH
THE  POLE

Eskimos who made trip
with dr. Coo Brand.
Him Faker.

London, Nov. 9.-Dr. Frederick A. Cook’s Eskimos, who accompanied him on his last arctic trip, have told Knud
Rasmussen, the Danish explorer, now at Cape York, that the doctor and his party traveled around in a circle and never reached the pole.
Capt. Rasmussen obtained the narratives from the natives and sent them to his wife at Copenhagen, by whom they were made public.
“Already In the fall of 1909, when I was  on an expedition to Greenland,” writes  Capt. Rasmussen, “there existed grave doubts as to whether Dr. Cook had been near the north pole, and I made up my mind to secure through thoroughly disinterested people a bona fide report of his Eskimo fellow travelers, Itsukusuk and Apilak.

Live the Lives of Savages.

“These young men belong to a tribe near Smith sound, the members of which still live the life of savages. They possess no written language and therefore l had to get somebody to write down the young men’s report. The Rev. Gustav Olsen and  Kateket  Sechmann  Rosebach, both born In Greenland and newly arrived missionaries to this tribe, did the writing.
“Further, I received from the manager of a. copper mine in Greenland a man named Nyboe, assistance in getting the report. In the fall I forwarded a letter from South Greenland by sledge to the missionary station and the letter reached its destination in the winter.
“On my arrival at North Star bay this summer I found the report in the Eskimo language awaiting me and herewith is my verbatim translation of the narrative given by Dr. Cook’s companions to the Rev. Mr. Olsen. I myself have not seen the young men since they returned with Dr. Cook, but I know them from earlier times. They are clever and trustworthy men and l consider this report, obtained by wholly disinterested persons, on the question of the reaching of the north pole by Dr. Cook more valuable than any I myself could have obtained.

Narrative of the Eskimos.

“The narrative is as follows:
“‘We (Itsukusuk and Apilak) traveled from Anoritok (Annatook) with eight sledges in company with Dr. Cook. At first the great doctor himself drove, but not very long, the departure took place at the first sunshine (February.) On the way from Anoritok to Ellesmere land we slept once on the ice. It took four days to cross Ellesmere land, since we continually had to go back for baggage.
“After eighteen days our companions left us, we were then as far from land as from our house to Alanguarsuk (about two and a half Danish or twelve English miles.)  We did only short day journeys to shoot game for the dogs, and we laid up three or four days because of bad weather.
The Ice was fine to travel on. There was as not the least screw ice, but all ford ice, which resembled fresh water ice, so easy was it to drive on. On the day the help (supporting) sledges left us we did only a short day’s journey on fine ice. So short was the journey that the land behind us looked no lower than it did before our departure. There was no reason whatever to stop, for anybody who wished could proceed.

The following day Dr. Cook took observations with an Instrument he held in his hand and thereupon we returned toward land holding our course west for our starting place. We left a lot of food for men and dogs, and the dried meat, of which we had hardly used-any, We kept on toward a cape of the land which was not far off. The ice was rather hummocky, but it was not bad traveling.
Before leaving, says Itsukusuk, l examined the ice, and when I came back to camp Dr. Cook asked me if the ice was good. “Yes,” said I. Thereupon Dr. Cook himself examined the ice and he said that it was bad inspite of the fact that the ice was really not bad. On the Journey back we reached open water near the land. Here we stayed one day. At last we reached land. We crossed over to a big Island (Rignas Island) before the snow had melted (April.) We had not had the least fog on the ice. At this time  the sun was just below the horizon at night. It was the month when it does not get dark (March.) Later along, when we were near Axel Helberg land, we spent two days in a fog.

Then, says Apilak, one day while near the land I came upon Dr. Cook sitting down and drawing a map, I looked at it and asked him: “Whose route are you putting down?” “My own,” said Dr. Cook, but that was a lie, because he drew the map a long way out at sea, where we had never been.
‘We continued to shoot bears on the Ice until we had enough for the dogs. From this part or the journey we do not remember how many times we slept. The small   rivers had only begun to break when we reached the land, which we crossed over (the land northeast of Hellsgate) and reached open water (Hellsgate). There in accordance with the wish of Dr. Cook, we left our dogs behind us, although they were in good condition and fat from the meat of bears. Before we met bears we killed some of the dogs to feed to the others.
After leaving the dogs we crossed the great sound, but if we had followed the north side of the sound we could have driven farther. Again we reached ice and had to push our boat along on it.  When we left our dogs Dr. Cook said: “We will reach human beings (Baffin’s land) before two days.” We had slept twice when Dr. Cook, looking ahead through his glass, said “I soo a tent.” I took the glass and found that it was a big stone. When we had to get into the boat we had taken our sledges to pieces and packed them up, but now we put them together again, when Dr. Cook went ahead. “I believe we must be near human beings,” said Dr. Cook and kept on going ahead.
When we had finished with the sledges we went after him and on reaching him pitched the tent, after having caught a seal. At this time we still had biscuits and coffee, we looked a long time for humans and then returned toward Jones sound, over the same route, we now found at the same time open water and Ice until we came to an Island with many elder birds. It was just at nesting time. We tried to row on, but were caught in a strong gale which blew us back toward the south side. We were then again out in a big bay with ice covered with water.

Build House of Stone and Peat

‘We followed the land past Cape Sparbo and lived on seals, bears and musk oxen. As we came farther south and east the bears became shy. We then thought we were not far from humans, but as the ice was constantly drifting toward the coast and our provisions were near their end we returned toward Cape Seddon where we arranged for wintering.  It was yet twilight the whole night, but there was a strong tall of dew. We built a house of stone mixed with peat, just as we do at home. “It was at the time when the ground began to freeze. We caught walrus, musk oxen and bear tor the winter. Our skin clothes were in good condition, but to be sure we removed them. Our means of defense were a gun, harpoon, lance and bow. With the bow we killed only two hares. To kill a musk oxen with a bow is impossible. Altogether it was a fine autumn and our provisions for the winter were plentiful. We had bolled meat   every day. During the dark time we stayed mostly indoors making skin clothes, such as for coats bearskin pantaloons and skin boots.

Dr. Cook made himself a woolen Anorak lined with a musk ox fur. He wrote all the time. At the first sight of the sun we started toward home. We loaded the sledges with musk ox meat.  We still had four pemmican cakes, but our biscuits had come to an end.
‘We now continued by pushing the sledge ahead of us. As long as we were along the side of the land we had fine weather and were weather bound only one day. We shot a bear with the gun. Across Smith sound we also had fine weather.  Along the edge of the ice we had target shooting with the seals, which came up on the ice to get their breath. Thus we had only four cartridges left. Not before we were near Anoritok did we leave the sledge. The sun then was in the sky day and night.
“Dr. Cook, during the journey, promised us a good reward, but he proved himself a liar and swindled us in the payment. We did not get the guns he promised us. These he sold for fox skins. He gave us only a knife, some matches, and a useless boat
This is all we, Itsukusuk, and Apilak, have to tell about our journey with the great Dr. Cook.”

Capt. Rasmussen remarks in conclusion!
“This report I regard as absolutely authentic and reliable. It now only remains to show how it was possible for this Eskimo tribe to have quite a different idea of Dr. Cook’s expedition when I was there in the summer of 1909. According to what is now known, Dr. Cook, as long as he was with his two companions, said nothing about having been at the north pole, but said merely that it had been a long and difficult Journey.
“Only after he left Cape York and his two companions did the swindle begin. His new companions could not think it possible that white men would tell lies on so important a matter.
“The map drawn by Itsukusuk, which as compared with the map made by Capt. Sverdrup, is most wonderfully well done, considering the fact that this was the first time in the young man’s life that he had tried to use a pencil, is even more convincing, perhaps, than the report itself.  It shows fully the Eskimo`s astonishing power of observation.